We need to do this ourselves. Get Rid of Daesh!

Message to #ISIS in #Mosul: You will be overcome and gathered together to Hell and wretched is the resting place. Cain killed Abel with a rock. A woman will send you to a grave. 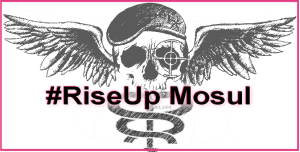 My favorite firearm might seem ludicrous to you as I am a very small person. Being Asian and agile, you might think I should prefer the smaller weapons like the amazing Tavors made by IWI in Israel or my Galil which can double as an assault rifle because of its folding stock. But my number one firearm is the American Barrett M82A1. Kill.

It makes holes in people the size of hubcaps. I will. I do.

My custom scope is equipped with the BORS. This Barrett Optical Ranging System helps me dope the scope like never before. First shot on-target kills happen at over 1500 meters on occasion but the 800 meter kills are more frequent and easy.

My 7.62x51mm IWI Galil is smaller, lighter, fires 25 rounds from each clip (My Barrett clips hold ten.) and I can just grab her and chase an enemy down the stairs and through the building.

My people are ordinary citizens who have become vigilante or resistance fighters against Daesh. Those words are wrong. I call them heroes.

The Islamic State Caliphate people have attracted thousands of brutal serial killers like those chained in prisons for scientists to study. But they can only bully the weak. They are no match for ferocious resistance fighters. The Mosul Underground Resistance will kill them. They should run like hell.

These ferocious resistance fighters, many women among them, from the various brigades of Mosul and Nineveh, are my people and I will be watching out for them, protecting from above. #Riseup people of Mosul.

Tell all Mosawlis, “come to the streets”.
Every MuR captain and vigilante resistance supporter must take control of their own street and community to remove the Daesh. They may not enter | they may not leave alive. Block your street and control who enters. Your guns, knives, razors, swords, rocks, axes, shovels, pitchforks, irons, pots, pans, a can of food, hammer, lamp and glass bottles are all weapons. Wear protective gear like gloves, motorbike helmets, bicycle helmets, leather jackets, leather clothes, denim clothes, steel-toed footwear, and eye protection.
Arm yourselves. #riseup

Find the Daesh on your street and use arson, guns, swords, anything to get rid of them. Read this to learn more >>