We don’t believe that Abu Bakr al-Baghdadi is still alive and well but we know his family and henchmen are in Sirte, Lybia.

If he is alive, Baghdadi is in Sirte with many of the salafi jihadist Elders who were moved to Sirte in Lybia. They had passed through Mosul Iraq in March 2015.  Many are in Sirte, Libya, close to Tripoli, launching a campaign to take control of that country.

U.N. Report: While currently concentrated in its stronghold in Sirte, ISIL could seek local alliances to expand its territorial control, also entailing the risk of motivating additional foreign terrorist fighters to join the group in Libya

It was pure fluke that al-Baghdadi was injured 18 March 2015 during coalition airstrikes in the al-Baaj District, in the Nineveh Governorate, near the Syrian border.

al-Baghdadi had been in Tal Afar and in Sinjar and was on his way to Raqqah after a meeting he was planning to attend in Baaj. Several convoys proceeded from Hwy. 47 in Sinjar south west on the al Baaj road. We don’t know exactly where he was hit but there were many casualties that day.

(Baghdadi’s wounds were serious enough that top ISIL leaders meeting that day discussed who would replace him if he died.  Akram Qirbash was discussed as was Abu Ala al-Afri.)

We were told al-Baghdadi was taken FIRST to a small clinic in a doctor’s office which was quickly converted to an O/R. He was to stay there until he could be moved to Mosul or Raqqah to the medical center. Two of our nurses traveled with a doctor from Mosul to Baaj INSTANTLY. They had been there before to tend to the health of Elders. They knew what they were doing and were closely guarded, at time blindffolded.

Separated from the medical crew, the MUR’s @TheReaperTeam struggled to gather intelligence.

At that time we found persons who could identify two people who looked like Baghdadi but were in different locations. One was Mosul after a hasty retreat to that city. They were seriously injured. They were likely in the same convoy or one of the other two that were leaving TalAfar that day or converging in Baaj from other directions where many of the ISIS elders had been relocated from Iraq via Mosul. This was  a very important area where many of the Elders were considered safe: from  Qabr Hhajar to Baaj.

The two we identified were surreptitiously administered lethal injections in their beds by somebody. We had seconds. That’s a story to be told another day.

Other VIPS were then taken to Mosul and  Raqqah, later to Istanbul Turkey where they received spinal surgery, vascular surgery and an organ transplant. Who was who we do not know. Family members from among the elders went to Turkey and are now in Sirte, Libya. If Abu Bakr al-Baghdadi is alive he is not in the greatest of shape.

By 22 April it was apparent al-Baghdadi  was not a functional leader and was either dead or not yet recovered enough from his injuries to resume daily control of ISIL. Iraqi government sources reported to the media that Abu Ala al-Afri, the self-proclaimed caliph’s deputy and a former Iraqi physics teacher, had been installed as the stand-in leader while Baghdadi recuperated from his injuries. Other sources said Akram Qirbash had taken over.

On 3 May 2015, The Guardian reported that al-Baghdadi was recovering from the severe injuries which he had received during the airstrike on 18 March 2015, in a part of Mosul. It was also reported that a spinal injury which had left him paralyzed and incapacitated meant that he might never be able to fully resume direct command of ISIL.

13 May, salafi jihadists  warned that they would get payback for al-Baghdadi’s injuries. The Iraqi Defense Ministry believed and said to media that these retaliations would be carried out through attacks in Europe.

On 14 May 2015, ISIL released an audio message amidst a cacophony of disastrous stories circulating about the demise of ISIL top brass.

The audio tape they found was from al-Baghdadi. In the generic, date-non-specific recording, al-Baghdadi urged Muslims to emigrate to the Islamic State and to join the fight in Iraq and Syria. He condemned the Saudi involvement in Yemen and claimed that the conflict would lead to the end of the Saudi royal family’s rule. He also said that Islam was never a religion of peace but a “religion of fighting.”

al-Baghdadi’s regurgitated audio message helped stop the Command and Control hemorrhaging at the top of the ISIL chain and exerted the hope of control or influence at the top ISIL.

On 11 October 2015, the Iraqi air force claimed to have bombed al-Baghdadi’s convoy in the western Anbar province close to the Syrian border while he was heading to Kerabla to attend an ISIL meeting, the location of which was also said to be bombed.

Unequivocally, Baghdadi was not present in the Anbar convoy at all. 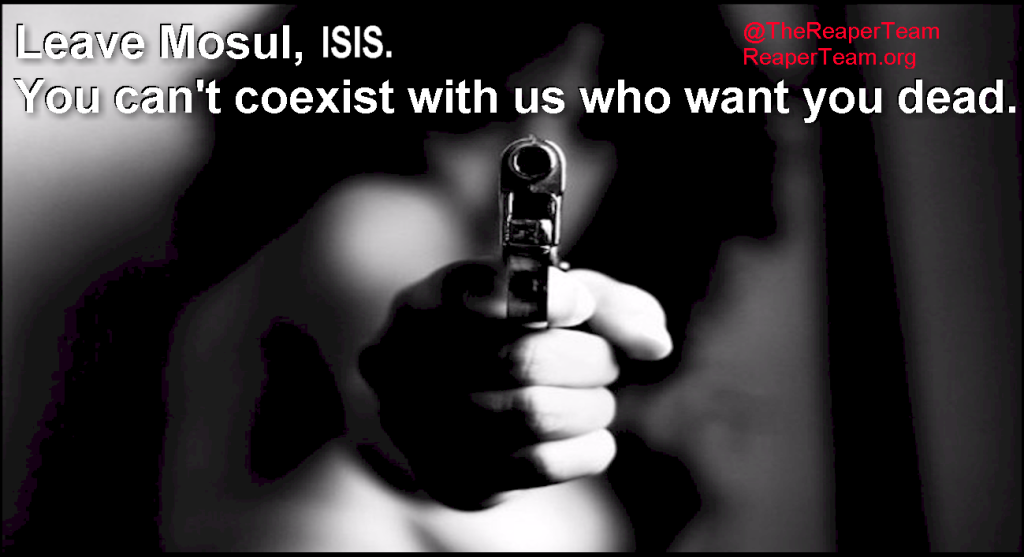