Seoul, South Korea – Undernourishment and eventual starvation will kill millions of North Koreans by end-2018. The killing has begun with children and the aged.

The sad part is that these victims are the people who would otherwise overthrow Mr. Kim Jong-un and turn this rogue nation around. But Donald John Trump, about whom the best and the brightest shrinks say “simply should not be entrusted with the life-and-death powers of the Presidency“, is looking for a war to fight that would distract from his failed presidency and bring about a revolutionary American war-time government with him in charge.

Sanctions against North Korea are defeating their purpose. Arguably the UN Security Council is killing its allies, the people of North Korea. Why are we starving these inmates of what boils down to a monstrous prison? Outside Pyongyang the Kim dynasty is hated. 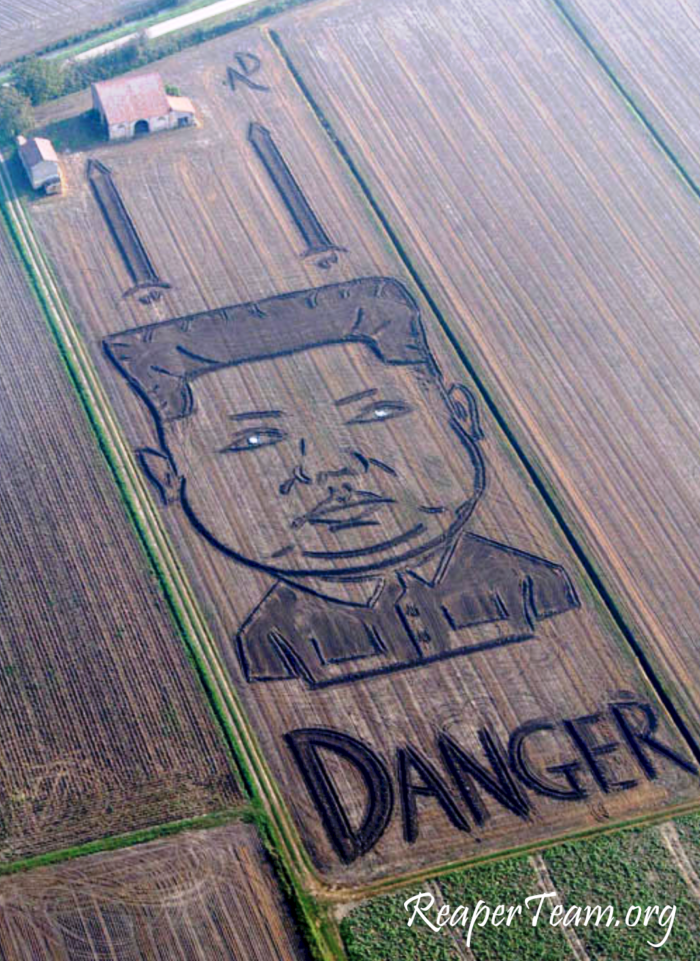 The United States White House acting independently from its military and intel agencies, seems to be against its own declared interests by starving to death its peasant allies in North Korea (DPRK).

To understand that one must realize that the United States President Trump railroads the Security Council by threatening to leave the United Nations, NATO and other alliances, pulling out its annual fees, and withdrawing other funding.

The Security Council and the Secretary General succumb to POTUS pressures to increase sanctions against North Korea. Their enemy is the same enemy as the Korean people: Kim Jong-un, the most violent, despot on earth. He himself, like Trump, is struggling to hang on to power that in both cases according to their detractors is ill-begotten power. Trump is accused of election fiddling with the help of the Russian federation and Kim Jong-un is accused of ‘seizing’ power from the bedside of his father whose death may have been sudden and unexpected, maybe even preventable. 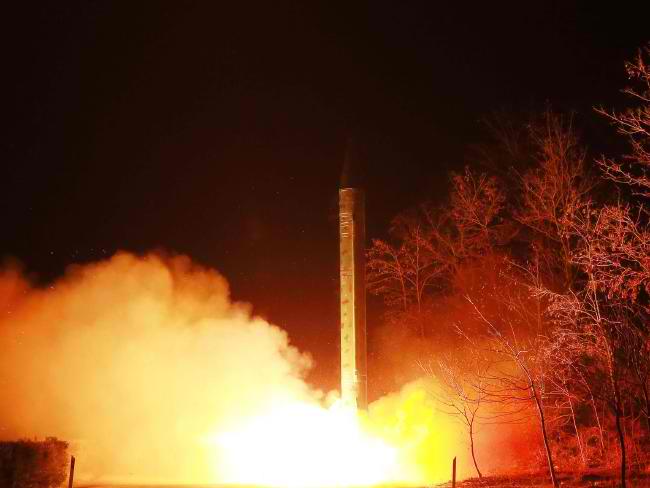 The world does not realize that the reason North Korea behaves badly is that its people have been treated badly.

Donald Trump is insisting on the world’s cooperation and acquiescence to Trump’s brutality, past and present. He helps oppress the world’s best ally, the people of North Korea. 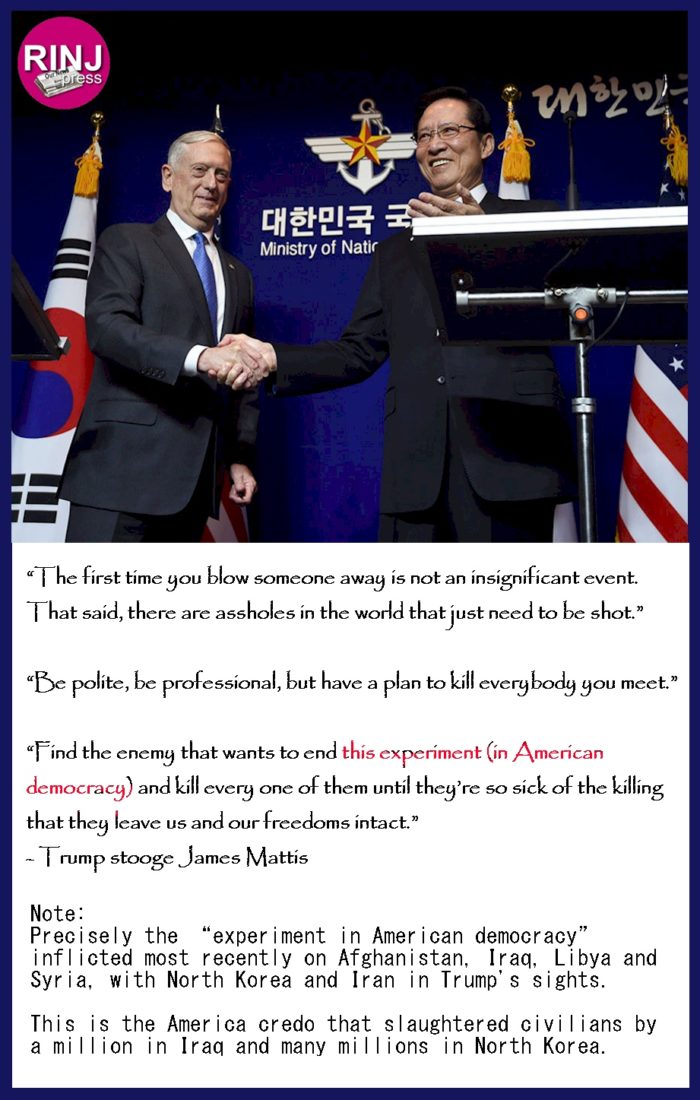 Depriving innocent North Koreans of medicine and food is unjust and not a role anyone intended for the United Nations. It’s blowing up in our faces.

Twenty-five million allies would over run the lunatics in Pyongyang if we were not starving them to death? In a letter from the DPRK People’s Assembly, the DPRK position is explained.

The Foreign Affairs Committee of the DPRK Supreme People’s Assembly sent an open letter to parliaments of different countries on Sunday.

The letter noted that Trump, president of the itself the “superpower”, denied the existence of the DPRK, a dignified sovereign state, and Spit out ignorant remarks of “total
destruction” at the UN General Assembly, stunning the world public.

The Foreign Affairs Committee of the DPRK Supreme People’s Assembly, the basic mission of which is to promote friendly and cooperative relations with the parliaments and peace-loving people of countries around the World, proceeding from the foreign policy of the Workers’ Party of Korea based on the ideas of independence, peace and friendship, bitterly condemns the reckless remarks of Trump as an intolerable insult to the Korean people, a declaration of war against the DPRK and a grave threat to the global peace, the letter said, adding:

From the 1st day of his office Trump has engaged himself in high-handed and arbitrary practice, scrapping international laws and agreements incurring his displeasure on the 1st principle”, the height of American way of thinking that it is best if the U. S. is well-off at the expense of the whole world.

The US. brought to their knees those countries devoid of principle, narrow-minded and selfish countries seeking after their interests with its nuclear stick and force and then cooked up the illegal “sanctions resolution” against the DPRK to deny the elementary right to existence of the Korean people and check their normal economic development in- breach of the inviolable UN Charter by abusing the UN Security Council. This is an intensive act of the revelation of the “US-First principle”.

Trump thinks that he would bring the DPRK, a nuclear power, to its knees through nuclear war threat, it will be a big miscalculation and an expression of ignorance.

The DPRK has emerged a full-fledged nuclear power which has a strong nuclear arsenal and various kinds of nuclear delivery means made by dint of self-reliance and self-development. The real foe of its nuclear force is a nuclear war itself.

The Foreign Affairs Committee of the DPRK SPA takes this opportunity to express belief that the parliaments of different countries loving independence, peace and justice will fully discharge their due mission and duty in realizing the desire of mankind for international justice and peace with sharp vigilance against the heinous and reckless moves of the Trump administration trying to drive the world into a terrible nuclear disaster. Today some 35% of North Korean children are already stunted from malnutrition. Many die unexpectedly from failure to thrive–no food, no medicine.

Human rights in North Korea have always been violated by everybody but  in this day human rights do not exist.

Nevertheless it is Mr. Kim’s own people who must hold him accountable. They are in the meantime being starved to death by the international community led by Mr. Trump.

Former Prime Minister of Portugal, António Guterres, now as the United Nations  Secretary General must no longer acquiesce to America and must put an end to this war footing that will destroy much of Southeast and East Asia. North Korea’s next move is to atmospherically test a thermonuclear weapon much as the US did some 60 years ago, in the Pacific Ocean.

This is part of a development program that North Korea has conducted for decades with the aim of being a member of the global nuclear club.

The country adamantly insists on this course of action because it deeply believes it is still at war with the United State.

Clearly the DPRK (North Korea) is a Nuclear Nation and has been for a long time.

The United States currently has a president who is some kind of TV reality show star.

Donald Trump is the man about whom twenty seven eminent psychiatrists and psychotherapists have written in a new book, “The Dangerous Case of Donald Trump”: “We collectively warn that anyone as mentally unstable as this man simply should not be entrusted with the life-and-death powers of the Presidency.” 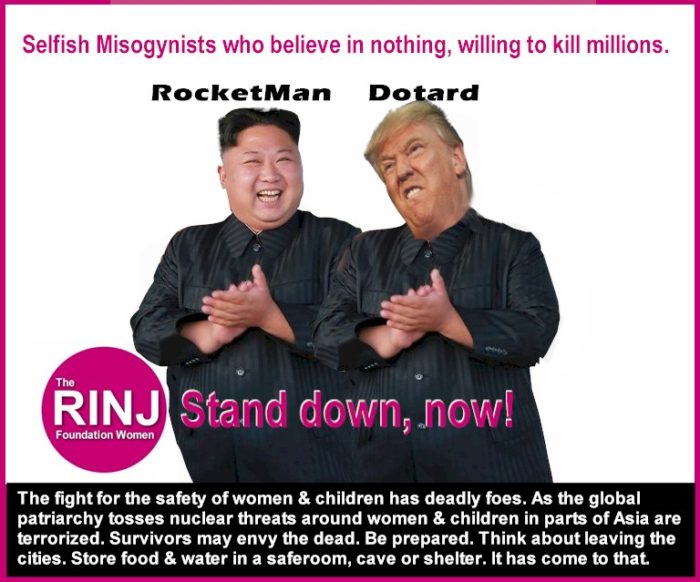 Learn how to build a simple safe room that doubles as a nuclear fallout shelter. It will be useful for cyclones and hurricanes as well as Trump disasters. https://rinj.org/nuclearwar

“Human rights abuses by DPRK regime remain among the worst in the world, including those involving extrajudicial killings, forced labor, torture, prolonged arbitrary detention, as well as rape, forced abortions, and other sexual violence inside the country,” said State Department Spokeswoman Heather Nauert whose president has been back-patting despots with much worse records.